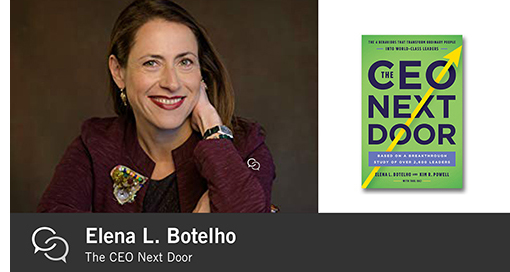 As we wrap up season one of the LeaderChat Podcast, Ken Blanchard and Chad Gordon revisit some of their favorite episodes. They share new thoughts about the important messages from our guests and invite you to send questions you would like Ken to answer in future episodes. Just send your questions to podcast@kenblanchard.com.

Enjoy this episode where Chad Gordon interviews Elena Botelho, coauthor of The CEO Next Door: The 4 Behaviors that Transform Ordinary People into World-Class Leaders to hear what it takes to become a world-class leader.

“Most ideals about why people are successful are driven by stereotypes and gut feel rather than facts and data,” explains Botelho. “In this book, we’ve aspired to provide information about how anyone can be successful by helping readers learn from other successful people in business.”

Learnings shared in the book are based on groundbreaking research and in-depth analysis of more than 2,600 leaders drawn from a database of more than 17,000 CEO and C-suite executives. Botelho describes the four behaviors of highly successful people as identified by the research.

Finally, Botelho shares some counterintuitive insights about making great strides in your career—what she calls career catapults. “Sometimes it is better to go small in order to go big,” Botelho says. Having an elite MBA or working for a marque company is a great way to advance your career, but sometimes taking what looks like a side step instead of always focusing on moving up the ladder can have a more positive impact. By being in charge of a smaller project, division, or group, you might actually have a chance to practice more skills and get more exposure.

According to the author, here is the most important message to take away from The CEO Next Door and this podcast: Excellence is more achievable for us than we assume.

Be sure to stay tuned for comments from Ken Blanchard at the end of the podcast!

Are You a Serving or a Self-Serving Leader? (free eBook)

Effective leadership comes down to implementing everyday, commonsense practices to help organizations thrive—and yet so many leaders are still missing these fundamental principles from their personal and professional lives. That’s why Ken Blanchard and I wrote Simple Truths… Read More

Leadership is a complex endeavor, but it doesn’t have to be complicated. We often tend to make things more complicated than they need to be and that’s true in the field of leadership. To prove my point, go… Read More

OnToplist is optimized by SEO
Add blog to our directory.